KUALA LUMPUR: The maths is simple to solve, but somehow a previous blueprint never summed up to the desired equation.

Indoor hockey has been the poor cousin of field hockey in Malaysia for far too long, even though our players are excellent at it, even with almost no tournaments and national-level training.

For an easier explanation, just look at the stats.

Malaysia are ranked No 1 in Southeast Asia following victories (both men and women) at last year's Philippines Sea Games.

At the Asian-level, our men were bronze medallists (behind champions Iran and runners-up Kazakhstan) while the women finished fourth (behind Kazakhstan, Thailand and Uzbekistan) in last year's Indoor Asia Cup in Chonburi, Thailand.

It was a World Cup qualifier, and only the finalists in the men's event and the champions in the women's competition made the grade.

Malaysia had very little training, and field players were converted overnight to compete in the tournament.

But despite this, they made great strides in the competition.

The men's team came close to reaching the World Cup as they were leading 3-1 against Kazakhstan in the semi-finals.

However, their fancied opponents bounced back to record a 4-3 win.

Enough of history, let's look forward, and forget the decade-old blueprints which are still collecting dust in someone's dark and dank closet after being diligently prepared, but never executed.

The Malaysian Hockey Confederation (MHC) have finally realised that the indoor game is the smarter kid but has been left behind with no help because field is the more glamorous and ambitious son.

Field players are normally picked for training a few weeks before an indoor tournament but this is set to change in the future.

Realising the potential in the indoor game, the MHC formed an indoor hockey committee recently that is now playing an active role in promoting the event.

An Indoor Malaysia Hockey League will be held from Oct 17 to Dec 20 at Sultan Idris Education University (UPSI) in Tanjung Malim, Perak.

With efforts taken to promote indoor hockey, Malaysia stand to make inroads in the future.

If everything goes well, the next time Malaysia play Iran, Uzbekistan, Kazakhstan and Thailand — the scores may equate to a different story.

Let's stay indoors for a longer period to not only beat Covid-19 but also win an easier of the two tickets to the World Cup.

Arshdeep Singh wants to take a leaf out of senior player Ramandeep Singh's book on how to manage injuries in his bid to seal a place in the national side. New Delhi: Indian junior men's hockey team core probable Arshdeep Singh wants to take a leaf out of senior player Ramandeep Singh's book on how to manage injuries in his bid to seal a place in the national side.

The 19-year-old Singh missed out on the Six-Nation Championship in Spain last year due to a knee injury. He is inspired by the way Indian men's hockey team forward Ramandeep has dealt with injuries in his international career.

"It was really disappointing to miss out on the Six-Nation Championship in Spain last year. However, I have realized that injuries will be a part and parcel of any sportsperson's career. I look up to the way Ramandeep Singh has dealt with injuries in his career," Singh said.

"He (Ramandeep)is an inspiration for all young hockey players in India. One needs a lot of determination to come back from injuries and now I know how important it is to ensure that I keep checking on how my body is reacting in every situation," said the young forward in a Hockey India release.

Singh, who has attended several junior men's national coaching camps, said he has been focussing on his fitness in the last few months.

"The last few months have been a huge challenge for all of us. However, I have taken the time to focus on my fitness. I know I am close to receiving an opportunity to play for Indian junior men's team in the near future and I don't want to miss the chance due to an injury.

"I have been practicing yoga to become mentally stronger as well. I have to be absolutely ready to grab my opportunities whenever they are presented to me," said Singh.

Talking about his future goals, Singh said there is nothing bigger than playing for the country.

"Playing for senior team is always going to be my biggest goal. However, I have to first perform at the junior level and get recognized as a skilful player. I will keep working towards my goal in whichever way I can.

"I am sure one day I will walk out on the pitch with the senior Indian team. I will work very hard to ensure that I get a chance to contribute to India's famous victories in the future." 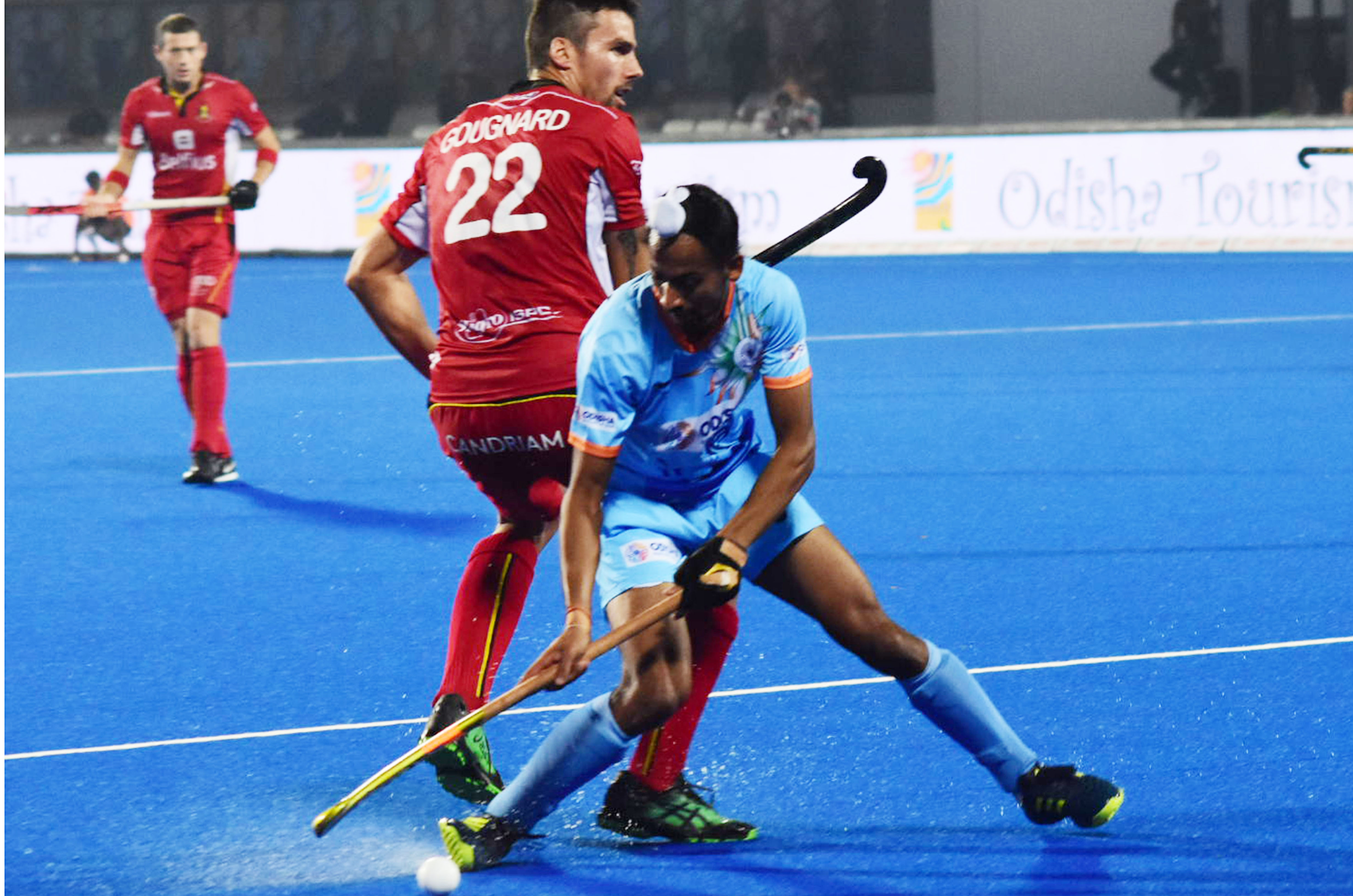 The crowd was hardly countable, but they were applauding loudly.  Those fans who lined up the  turf barricade to watch the Indian colts take on the Junior England team, were treated to a visual pleasure  as some of coach Harendra Singh’s boys were facing the well-built and well-oiled English team at Bishem Abbay, a hockey facility near London.

One boy among them was attracting them often with his masterly at midfield, as attacking mode. Avtar Singh Bhurji, a former Uganda hockey Olympian but now resides in UK, sees in him a bright future and trying to invite the player to his Club/house after the match. He was among the many there the boy has won them over with his energy and enterprise .

He was shy. Was sitting in a corner when the Indian Gymkhana Club organized a grand lunch in one of the rest days at London.

When almost all of the team members made it to the Junior World Cup a few months later, he was not lucky.

“These 22 boys are so talented that I will have extreme  difficulty to pindown my final 18” said Harendra Singh often during the tour.

Dropping of Hardik Singh, who hails from a hockey provenance in Punjab called Khusropur, which produced triple Olympian Haripal Kaushik and others, must have been a painful exercise.

That year in 2016 Harendra’s boys created an indelible mark by winning the Junior World Cup at Lucknow. But Hardik was left to play at U-18 Asia Cup which he won. His colleagues won Jr World Cup, but he was content in celebrating in a small way at Dhaka. At Dhaka Sub-Jr Asia Cup, he was declared best player of the tournament, but it was small consolation for a player who dreamt big.

Hardik certainly had a painful 2017. As fate would have it, there came a situation that coach Harendra Singh who was swapped with Sjored Marinje, returned to men’s side.

Though disheartened, young Hardik  Singh was in the camp among the core group. His time has come.

When his time came, it came with a bang. It was not a run of the mill test series but a serious tournament in Asia, the Asian Champions Trophy. A silver was promptly won. Since then Hardik Singh’s hockey carrier took an enviable  turn. He missed the Jakarta Asiad shortly but not the World Cup at Bhubaneswar.

Since then, there was no stopping of the midfielder. He was a fixture since those Bhubaneswar days.

Azlan Shah Cup, Series against top notch teams like Australia and Belgium, Olympic Qualifying Series and then the much-awaited Pro-League.

His rise is meteoric. He is a long term material under the watchful eyes of the latest foreign coach Grahm Reid.

Hockey Australia has launched a new and updated suite of child safeguarding policies.

Known as the Safe Hockey Framework, the enhanced policies and processes provide even greater safety for children and young people, while upholding Australian hockey’s excellent reputation in sport integrity.

The new policies have been endorsed by the Hockey Australia (HA) Board, with formal adoption to follow by all Member Associations, a move and progression that HA President Melanie Woosnam is proud of and pleased to see happen.

“A lot of work has been undertaken to get to this point with these more detailed and enhanced policies which will be applicable in every jurisdiction,” said Woosnam.

“To have a unified approach with all of our Member Associations on board with this framework is crucial.

“These policies will hold hockey in great stead now and into the future and provides a consistent approach across the sport. We are committed to providing safe environments for children and young people.”

More than 40 face to face education sessions have been delivered to over 1,000 individuals as part of the Safe Hockey project. This has included participants at under age national championship events, providing important information to young people on their right to feel safe.

The key purposes of the Safe Hockey Framework are to enable and deliver targeted education on how to identify and respond to child safety issues, as well as educating children and young people on their right to feel safe.

The Safe Hockey project was launched in July 2019 and forms a key component of the Integrity pillar in Hockey Australia’s four year Strategic Plan 2019-2022. Supported by all state and territory Member Associations, and with funding received from Sport Australia, the project is one of a growing number of whole of sport initiatives being delivered within Australian hockey.

Work is now underway on the next phase of the Safe Hockey project, which will see the development of club facing resources and education to support the thousands of hockey volunteer administrators provide the safest environments for children and young people.