Memories of a very special friend. 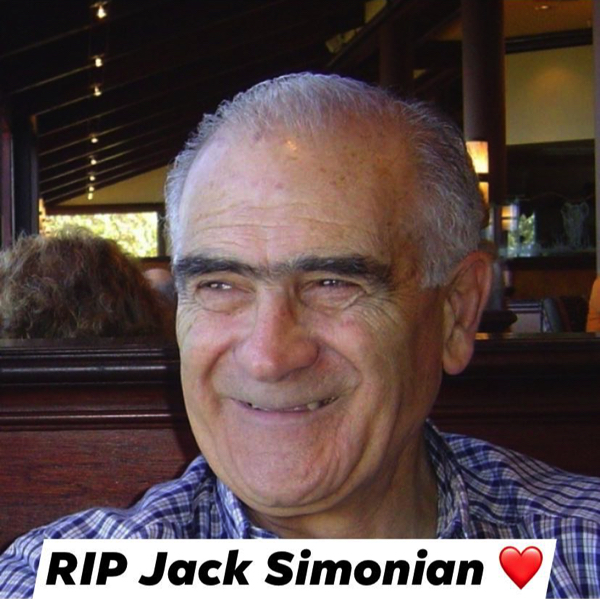 I first met Jack Simonian through umpiring hockey at Rugby Hockey club in Warwickshire. In typical Jack fashion he never let on his Hockey pedigree, so it was with complete surprise when umpiring a game together a few years later some know-it-all player disagreed with a decision Jack made by claiming he had played in Premier League so he knew Jack was wrong. Quite calmly Jack said, "I've been to three Olympics so I know I'm right". Needless to say the player was put firmly in his place, but my mouth fell open at this statement as I had never suspected he was an Olympian let alone a triple Olympian, Jack was so unassuming.

In the pub after the game, Jack explained he had played Goalkeeper for Kenya at the 1960 Olympics in Rome, the 1964 Olympics in Tokyo and the 1968 Olympics in Mexico and that he should have gone to the 1972 Olympics in Munich, but in retrospect was very please work commitments kept him from going. I also found out that he had been the East African Safari Rally Champion in both cars and on bikes!

By now I had tasted the Famous Jack Simonian Curry that ended every pre-season tournament that Rugby Club ran. It was fiery hot but so delicious. He also introduced me to Basmati rice, which quickly became the only rice we eat. He taught me how to cook both to perfection, though my curries are decidedly cooler than anything Jack made. His curries were that renowned that he often made them for his local pub in Monks Kirby, where they were always a huge hit.

Fast forward a year or two to 1997 Junior World Cup in Milton Keynes. I was sitting in the stands just behind a few acquaintances from the Birmingham and London Sikh Union and Khalsa clubs and they were chatting to a visiting friend of theirs from Kenya, one Avtar Singh Sohal, better know in Hockey circles as Tari. Tari turned to one of the guys and asked if he knew where Jack Simonian was to which the reply was, "Somewhere in the Midlands near Rugby". I quickly called Jack and told him I had a surprise for him and handed Tari my phone rekindling a friendship that had begun at the Sikh Union Hockey Club in Nairobi in the 50s. Tari had been captain of the Kenyan Olympic team at the 3 Olympics Jack went to. I took Jack to the next day's play to meet his old friend. They promised to get together again soon and that gathering happened at my house where there was a veritable gathering of former Olympians as well as Hockey administrators from both Kenya and Uganda.

One of the outcomes of that gathering was an undertaking for Uganda and Kenya to  once more play international matches against each other and in due course this happened. Jack and I were invited to come out to Uganda at their expense to umpire these historic games (being unofficial internationals we were allowed to have this honour). At breakfast the first morning at the Hilton Kampala, Jack asked the waiter if they had any Tobasco sauce to which a brand new bottle arrived at the table. Jack proceeded to turn his eggs completely red and the bottle lasted 3 days before having to be replaced! I still enjoy eggs and Tobasco sauce, but I am only brave enough to put 2 -3 drops on instead of drowning my eggs.

Jack and I umpired the Ugandan Club Championships including the final during that week, and although there was some doubt if the Kenyan teams were actually going to make it, eventually the Kenyan Women's team made it and two Internationals were played. After the games the Kenyan captain thanked us profusely for umpiring saying it was some of the best umpiring she had experienced. I was a bit taken aback as they had not long returned from the Commonwealth Games in Malaysia where some very impressive umpires had been on duty. We had been favourably compared to the likes of Gill Clarke, Jane Nockolds, Jean Buchanan and if I'm not mistaken Marelise de Klerk who went on to blow over 200 internationals.

Back home I got to hear of many of Jack's exploits and suffice to say, what goes on tour, stays on tour. It did come out though that after the 1968 Olympics Brigadier Atif of Pakistan offered Jack a Pakistani passport if he would change allegiances and play for Pakistan!

I accompanied him to many Sikh gatherings in Birmingham, Coventry and London because "he had always driven with a navigator and these Sat-Nav things were bloody useless at the job" and it never ceased to amaze me how parents would bring their children to introduce them to The Great Jack Simonian and seek out his autograph. That is how much of a sports legend Jack was in the ex-pat Kenyan Sikh community in England.

Jack's love of motorbikes saw him dashing around Warwickshire on a 250cc Suzuki until one day while transporting a 50Kg bag of coal on the back of his bike his foot caught on it while dismounting bringing the bike and coal crashing down on him and breaking his hip. "All those years of rallying without serious injury and now, like a silly bugger, I do this to myself" he lamented.

When my son started expressing an interest in riding motorbikes (which must be every parent's nightmare) I told him he should speak to Jack. Jack immediately corrected Charles' terminology by saying "they are not motorbikes, they are coffins on wheels". After a brief pause while that sunk in, Jack continued "You know in a car they have a crumple zone to save you from injury? Well on a motorbike you are the crumple zone". My son has never again entertained the idea of riding a bike. Thank you, thank you, thank you, Jack.

Restricted now to his trusty red Nissan Jack made sure he would never be caught shot carrying everything including the kitchen sink in the back of the car. There were enough supplies in it I swear he could have survived at least a month if he ever got stranded.

For his 70th birthday his kids bought him a driving experience around Donnington Park Race track in a souped up sports car. When he took the wheel the instructor by his side was having puppies at the speed Jack was going into the first corner and when they emerged safe on the other side the instructor said "You've done this before" to which he replied "East African Rally Champion in cars and Bikes". The instructor admitted he was probably superfluous to the ride and sat back and enjoyed getting a Jack masterclass.

Jack always expressed wonder at modern goalkeeping equipment and often said, "I wonder what I would have been like in that gear. In my time it used to hurt like hell when you got pinned." Last year I saw a picture of Jack in his heyday at the Olympics. In cane pads with cricket wicket keeping gloves on he was diving head first at a striker preparing to hit the ball. "Jack you were insane!" was my comment to him. I don't think a keeper with all today's modern safety gear and helmet would do that now!

On my 50th birthday in 2006 Jack presented me with an FIH tie still in its cellophane wrapping with the injunction that I would probably be more likely to wear it than him. No other explanation was forthcoming as to how he had an FIH tie, but for me it was a fantastic gift that I treasure. I only starting thinking last year as to how Jack came to be in possession of this tie when he mentioned in passing that he had been goalkeeper of the Tournament at the Olympics, which was why Brigadier Atif had been so keen to get him on board. Slowly the penny dropped that in the 60s the Olympics was very much an amateur occasion so any prize given to a player could only be something like a tie. On asking Jack about this he confirmed that he had been awarded the tie as Goalkeeper of the Tournament at the 1968 Olympics in Mexico and that the tie was indeed his prize. 38 years later and still not out of the cellophane, no wonder he said I would be more likely to wear it. I am still amazed that I was given such a priceless piece of Hockey memorabilia by Jack and treasure it even more than before.

Earlier this year I told Jack that I had taken up infusing gin with different botanicals and was enjoying the experiments. He told me his favourite gin was a rhubarb gin and I promised to give it a go if I found some rhubarb. A couple of weeks later I indeed found some and duly started to make rhubarb gin. After 12 hours of infusing I tasted it and it was awful. "All those years of drinking Tobacco sauce and your overheated curried have buggered up you tastebuds", I told him. "Patience" was his reply. True enough a further 12 hours down the line something wonderful happened and rhubarb gin is now a firm favourite of everyone who tastes it. Thank you, Jack, I will remember you every time I have one (and my wife has got me to make 10l on tap for Christmas so there are going to be a lot of memories!).

When I wished Jack a happy birthday on the 15th of December he thanked me and added this line "However, we are all leaves on a tree, some fall off and others stay on for a while!! I do miss all your company, but memories will have to suffice. Such is The Precious Life that we are gifted!!"

Just on Sunday via email we were bemoaning the fate of his beloved club Sikh Union, Nairobi being relegated from the Kenyan Premier League and before I could reply, Jack's leaf fell.

When I returned to South Africa from living in England, Jack gave me a beer mug with the Afrikaans expression "Totsiens" engraved on it which essentially means "until we meet again".

Totsiens, my friend, you will be sorely missed by me and my family. You were a very special friend both on an off the Hockey pitch.