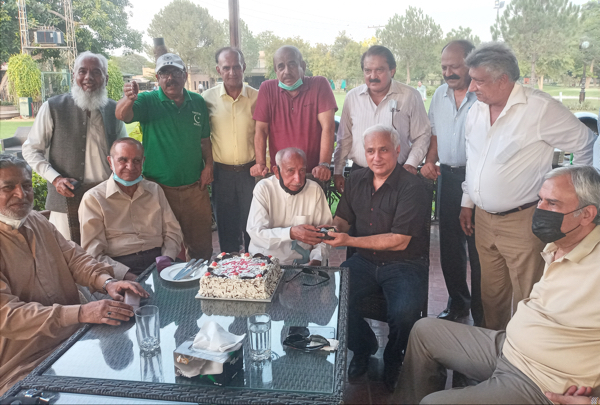 After a hiatus of seven months due to the Covid 19, meetings with hockey stalwarts, organised by former international Major (retired) Peerzada, resumed.

Gulraiz Akhtar, gold medallist 1968 Olympics & 1970 Asian Games, and one of the finest left halves to play for Pakistan was the chief guest at a well-attended gathering at the lawns of the golf and country club, Lahore.

Guests included the captain of that victorious team of the 1968 Olympics, Dr. Tariq Aziz, and another member of that side Anwar Shah.

Gulraiz recalled, "I was lucky to have been born in Rawalpindi, the biggest hockey centre at the time. Then my uncle Naseeb was the 1956 Olympics silver medallist and elder brother Pervez was also an international.

After representing the army in the nationals for a few years, I joined Customs.

I debuted for Pakistan at the 1966 International Hamburg Festival but couldn't gain the selection for the 1966 Asian Games. However, I was the first choice left half in Pakistan"s gold medal-winning sides of the 1968 Olympics and the 1970 Asian Games.

At that stage, I said goodbye to international hockey but continued appearing for the Customs in the domestic circuit."

At the 1972 Olympics, Pakistan lost in the final against former West Germany.

Dissatisfied with the umpiring, Pakistani players misbehaved during the medal ceremony.  The FIH punished them with the life ban, later reduced, and the players were eligible for the 1974 Asian games.

With those players unavailable, the Pakistan team for the 1973 World Cup mainly comprised newcomers. A few old-timers were recalled including Gulraiz, who reminisced, "That second string Pakistan side surprised everyone by reaching the semis where we lost to India 0-1. In the 3rd position playoff, West Germany defeated us with the same scoreline"

"I retired from customs in 2000 and have been living in Lahore for a long time now."

Gulraiz Akhtar was also presented with a souvenir by Major (retired) Peerzada who promised to make such meetings a more frequent affair.

Ijaz Chaudhry writes on hockey & other sports. For more about him and his work, visit: www.sportscorrespondent.info