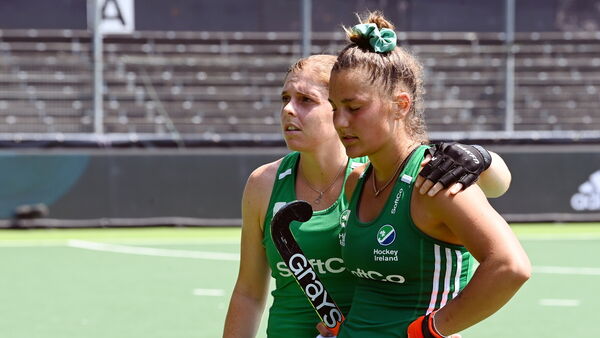 Kathryn Mullan (C) and Elena Tice dejected after the game against Spain which saw them Ireland exit the European Championship. However, a World Cup spot is still up for grabs. Picture: INPHO/Frank Uijlenbroek

Ireland’s women need to bounce back quickly from Wednesday’s draw with Spain as they go in search of the last remaining World Cup ticket on offer from this week’s EuroHockey Championship in Amsterdam.

Ireland missed out on a semi-final berth on Wednesday on “goals scored”, having tied with Spain on both points and goal difference. The Green Army will meet England Friday morning (10.30am Irish time, live on RTÉ Player) before taking on Italy on Saturday (3.30pm, Irish time).

Ireland carry their 1-0 win from the initial group stages against Scotland into this four-team pool from which the round-robin winner will be assured of a place in next summer’s World Cup.

England also have three points courtesy of a 4-0 win over the Italians but are in unfamiliar territory; this is the first time in 15 European Championships they will finish outside the top four.

Ireland’s Flying midfielder Sarah Hawkshaw says the side will take a lot of confidence from their 2019 campaign when they came similarly close to reaching the semi-finals but bounced back to beat Belgium and Russia in Pool C.

“I only saw the video days ago of the last couple of seconds of the Belgian game, Shirley [McCay] crossing the ball for Anna [O’Flanagan]. It also shows how quickly the game can change. We need to get the ball into those areas which will be really important against England and something we haven’t got enough of.

"Because anything can happen. There is no room for error and we have to produce results."